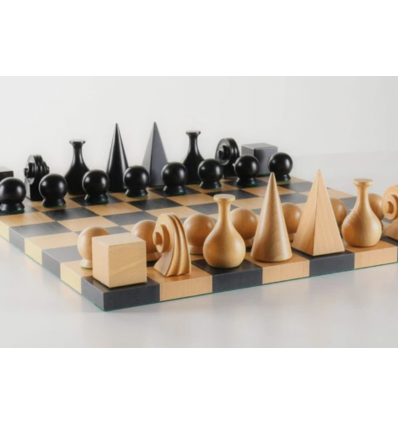 With his long career of pioneering work in painting, sculpture and photography, Man Ray (1890-1976) can readily be regarded as one of the most influential artists of the 20th century. In this first design of his relating to chess from 1920, Man Ray abandoned all the overly classical and figurative characteristics used to identify the pieces. Instead, he composed them of the pure Euclidean geometric “ideal forms” – cube, sphere, pyramid and cone. He still made iconic associations such as the pyramid with the Egyptian symbol of kingship, the cone with medieval queen’s headgear and the flagon with the bishop’s tradition of creating exotic liqueurs and spirits. Dadaist that he was, he could not resist interjecting at least one discordant, though still elegant, element into the ensemble. He based the form of the Knight on a found object in his studio, the head scroll of a violin. Its form, too, is based on pure geometry, though it is that of the Fibonacci sequence that defines spiral growth patterns in natural forms.

Licensed re-editiion in collaboration with the Man Ray Triust. Original and only existing set is in the permanent collection of the Metropolitan Museum of Art, New York.